• Big map of the Russian front centred around Warsaw on the first page.
• Germans are taxing flour sent from the United States as relief for Belgians, and
• in the same article, concern that starving Belgian civilians may attack German garrisons for food...
• A ship load of wheat will be sent to Belgium from Halifax, via Rotterdam.
• Two spies caught with British troops in Codford, England.
• Germans cut telegraph cables in the Baltic...
• Editorial speculating on the duration of the war. "The war will last until 1917."
• Belgians living abroad are asked to return to serve in the military. Travel costs will be paid by the Belgian military.
• Not actually news, but an ad. The Bank of Montreal prints their annual statement for 1914...
• The magazine section war technology page this week is on horse-drawn artillery [!!]
• Essay on "The Origin of Life" on the "Hour with the Editor" page...
• And finally, the usual excellent summary of the week's events in the children's section.

• German prisoners of war held on the Isle of Man riot, serveral are shot. Coroner's jury finds that shooting was justified.
• An article with a headline about was loans talks about the cost of the war, the wealth of British citizens but then goes on to talk about several other political developments...
• Rudyard Kipling praises Canadian troops.
• Austrian leaders fear dissolution of the Austro-Hungarian Empire after the war. Article makes a pretty good prediction of how the empire will be divided.
• Cowichan Indian women donate knitted wool socks, praised by Imperial Order of Daughters of Empire.
• Article in the "Women's Realm" section on the Christian morality of spying...
• And in a tidy little 1-2 punch of propaganda, there is an article on the next page about a German spy disguised as a priest.

Today it is not the battles in Europe and elsewhere that make the most interesting news. Today is about propaganda, technology, accidents and speculation...

• Germans are reported to be using some kind of "silent cannon" that makes no noise when fired, that in areas where trenches are very close troops are talking back and forth and agreeing to ad hoc cease-fire agreements [this is another lead up to the famous informal Christmas cease-fire, and will later be "solved" by old men in charge by introducing troop rotation so the cannon-fodder won't have time to get friendly enough to agree not shoot each other], but life in the trenches is generally cold and miserable.
• It seems a story from yesterday about disappointing recruitment drives at football [soccer] matches that I took as unimportant is a more serious problem to some. The British Prime Minister is expected to be asked to introduce legislation banning football matches for the duration of the war.
• A large shipment of tobacco products is being sent to Canadian troops.
• Strange political machinations in the hard-to-comprehend politics of Egypt.
• Commendations for British and French pilots for Zeppelin-shed raids.
• Canada's first expeditionary force expected to be on the front lines before Christmas. The article goes on to detail the physical training the men are getting.
• In an extension of the programme of internment of "enemy aliens" all Canadian soldiers with German-sounding names in the Salisbury Plain camp, many of which are decorated Boer War veterans, are arrested, removed, questions and likely to be interned.
An editorial describing Basra and its strategic significance.
• A senator from Saskatchewan defends the loyalty of Galacians and Hungarians on the prairies
• Questions in London Parliament about annuities being paid to members of the British royal family living in Germany

• Italian ministers confer on Italy's position in the war, still no official stance.
• Portugal declares it will stand with France and Britain, if need be.
• Story in German newspaper taken by Swiss to be a warning not to interfere with German troops should they enter Switzerland, and Switzerland vows to to defend itself, if need be.
• A Vancouver man, originally from Wales, died of pneumonia in Canadian camp of Salisbury Plain and was buried in Wales.
• About 80 interned "prisoners of war" relocated from Fort Garry, MB to Brandon, MB.
• Prior reports of Germans helping with food relief for Belgium are refuted by American relief workers.
• Report compares current desperate plight of Belgians to conditions during religious wars of the 16th century.
• Amusing editorial on British slang terms
• [And a reminder that there were still blank spots on the map in 1914] ...

• Nothing really new in the European theatre...
• In more exotic locales, there is news, however: British forces taken the port city of Basra and a British advance has been repulsed by Germans in German East Africa.
• A report of a secret movement for an armistice at Christmas...
• Ten million cigarettes donated...
• Story of a British raid on a German Zeppelin factory is, rather interestingly, reported from both the British and German perspectives.
• One of the cable station operators on Fanning Island recounts the German attack on the trans-Pacific cable station early in the war. 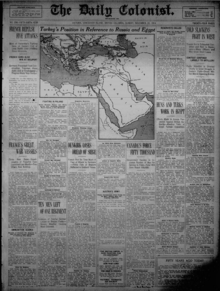 The news out of Victoria, British Columbia, 100 years ago today. As usual for the Sunday edition, lots of interesting stuff...

• In retaliation for the internment of Austrians in Britain and the British Empire, Austria initiates programme of arrest and internment of British subjects.
• Speech by Québec separatist leader Henri Bourassa in Ottawa cancelled due to public outcry.
Government of Canada by order-in-council [i.e. decree of the Governor General, not an act of parliament] bans four American publications with pro-German content. 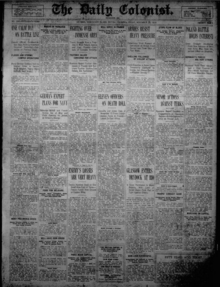 The first headline pretty much sums up the news day, "One Calm Day on Battle Line. French Official Communication Says Nothing Important Occurred Yesterday." Nonetheless, there are a few interesting things in the paper including some interesting articles on the cutting edge of science at the time ...and a lot of fluff that is mostly the same sort of tourist promotion that Victoria still flogs mercilessly...

Nothing quite on the level of underwater knife-fights with octopi today (I doubt that is ever going to be topped) in addition to horrible news of starvation in Belgium, there is plenty of interesting and almost as exotic news today including stories of:
• The French Foreign Legion,
• Fighting in the "Near East" and exotic Africa,
• The beginning of the events in "Lawrence of Arabia",
• Wild West mayhem with a stage coach robbery and a train robbery,
• An axe murder in Ontario and Ukrainian internment in Québec, and
• News of vital importance to the residents of Victoria...