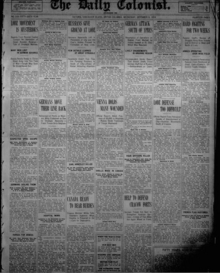 • Suspected spies escape from Ottawa to the United States
• Notice received that aviator Earl Annelsley of County Down [North] Ireland was shot down and killed by Germans over Ostend.
• Canada to produce a large volume of munitions for Allied Countries
• Conflicting reports of Russian actions near Lodz, central Poland...
• Japanese have announced they will not be turning captured German territory in China over to China...
• Army base a Petewawa is being converted to a concentration camp for enemy aliens, who will be put to work clearing brush and building roads. 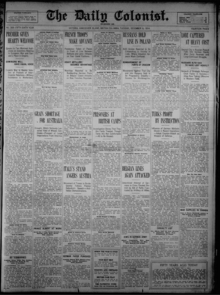 • Prime Minister Sir Robert Borden [the guy on the $100 bill] addresses members of the Canadian Club of Montréal in two speeches...
• Strange little article on the number of Jews in the German army...
• A more detailed report on Sir Robert Borden's speeches in Montréal...
• A notice on the back page that "All Subjects of Germany, Austria-Hungary and the Ottoman Empire" must register by December 31 or be liable to arrest as a prisoner of war. 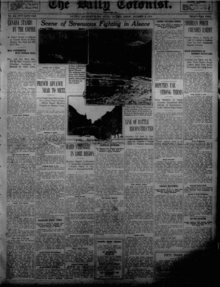 News out of Victoria, British Columbia, 100 years (plus two days) ago today:

• Prime Minister Sir Robert Borden [that's the guy on the $100 bill] addresses the Canadian and Empire clubs of Toronto...
• An interesting article detailing the current methods of trench warfare.
• Full-page war technology feature in the magazine section is on aerial combat.
• The usual excellent round-up of the week's events in the children's section... 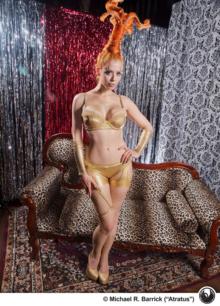 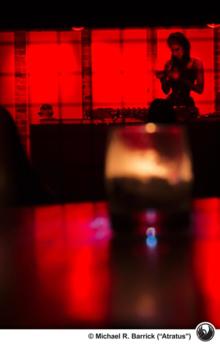 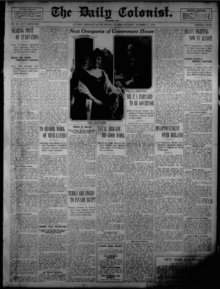 • Photo and biographical essay on the new Lieutenant-Governor of British Columbia, Mr. Frank S. Barnard, long-time resident of Victoria.
• Price of Wales [future King Edward VIII, famous for abdicating the throne in 1936 to marry Wallis Simpson] lauded for active service near the front.
• After failing to instigate popular revolt against the British administration in Egypt, Germany is now said to be trying to organize a Turkish invasion of Egypt.
• King George V extends his visit to the front lines.
• The federal government, prompted by letters from B.C. Premier, agrees that it is the responisibility of the federal government to provide for enemy aliens unable to work or leave the country.
• And indignant editorial in the "Women's Realm" section on the lack of enthusiasm in Victoria for cleaning up and cultivating vacant lots...

• King George V visits the front, walks in trenches with front-line soldiers.
Italy has announced that they are definitely, for-sure, not doing anything until they decide otherwise, if they feel like it.
• Men in funny hats have called for January 3rd to be a national day of asking for humbly asking their Imaginary Friend to help us and not the other guy. King takes issue with antiquated use of the word "humiliation".
• Dutch soldiers shoot Belgian refugees, killing six and wounding nine, when Belgians riot over concentration camp conditions.
• 42 "undesirables" returned to Canada from camp on Salisbury Plain. "Undesirables" include the physically unfit and unnaturalised immigrants.
• Ad for CCM "Automobile Skates"...
• Ad for "Important Sale of Ladies' Ostrich Feather Boas and Ruffles"... 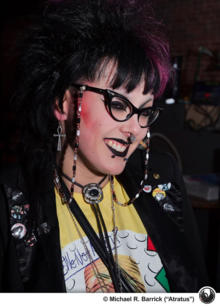 • On the eastern front, the Austrian army takes Belgrade, capital of Servia [Serbia] (remember how this war started...)
• Dispatches from Russia have the Germans in retreat again, although a Russian General that failed to make his objective was been relieved of duty.
• Italy might soon, maybe, announce what they think they might do later, if everyone agrees.
• Germans are expected to stubbornly keep doing the same thing they've been trying to do for months...
• General de Wet, leader of the Boer rebellion in South Africa, is captured, probably ending the rebellion that has been previously announced as probably over several times in the past few months.
• Germans in Antwerp refuse to not steal food and supplies until the government of Antwerp pays a £2,000,000 war levy that the government of Antwerp refuses to pay unless the Germans stop stealing food and supplies.
• Contract awarded for new grain elevator in Vancouver to handle the larger volume of exports to Europe now expected with the completion of the Panama Canal
• Editorial on the dangers of automobile headlights
• Puff-piece on the good spirits of Canadian troops housed on Salisbury Plain [containing this gem illustrating how language can change in 100 years, "And of all the gay young soldiers from Canada, those of the mechanical transport corps are among the gayest."]

• First, a retraction. The American Belgian Relief Commission says that rumours that Germans are taxing flour brought in to Belgium are false.
• An officer being belittled by the Kaiser for a tactical error gets pissed off enough to draw his sword and attack the Kaiser.
• From the "must be a slow news day" file: rank and file Canadian soldiers don't know when or where they will be deployed. This is on the front page.
• Canadian government to raise another 31,700 men to be deployed domestically until need overseas.
• and a few other weird articles underscoring that it is, in fact, a slow news day...