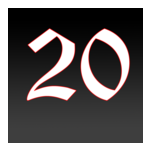 As of today, November 1, 2018, Gothic BC had been on the web for 20 years. Below are some words from some of the promoters that have made this possible my keeping the scene alive...

Gothic BC has been a strong staple of the Vancouver Goth scene for an extremely long time. It's a wonderful resource for finding out about upcoming events in our community, connecting with other community members, and providing space to celebrate our alternative scene. The site also offers a lot of history for the evolution of our scene.

It takes a lot of work and dedication to keep something so awesome for so long. Thank you for all your hard work and continued support to the Vancouver alternative scene.

Restricted Entertainment has been producing underground, goth, alternative, fetish and counter-culture events in Vancouver for well over 20 years, beginning around 1996, with long standing nights such as Sanctuary, Sin City Fetish Night, Madhaus and many more, developing an identity and history that stretches back literally decades.  The role of event photographer is always an important one to events, because as they say, a photo is worth a thousand words.  We can try to describe the vibe of an event all we like but nothing compares to a photo of the party in action.  We can try to remember what past parties looked like, how much fun it was, or how fabulous everyone looked, but memories will never equal a portrait immortalizing a moment in time.

Michael has been a pillar of the community behind our events, both in person hosting the photo booth as staff photographer, and for providing a website and online resource where people can easily find their photos from the events afterwards.  Michael is always reliable, punctual and professional, and can additionally be counted on to provide artistic input and help when putting together more complex themed photo booth backdrops.  He has taken and provided quality photos to literally thousands of attendees from our events over the years!

As the oceans of new photos and up-to-the-second information overload crash down on us on social media at ever-increasing speeds, it becomes increasingly difficult to sift through it and find visuals records from the past, making Michael and his Gothic BC resource ever more important as a glimpse into the history of our local alternative communities, ranging from events just this past weekend, to trying to find those photos from an event 20 years ago.

We’re proud to have worked with him in our local alternative communities for so long, and more than that, call him a friend!

For 20 years now, since the dawn of the internet, Gothic BC has been a one stop resource in documenting goth subculture in our remote corner of the world! Sadly, Vancouver has been overshadowed by Seattle and pop culture historians tend to view the Pacific Northwest simply as the birthplace of Grunge. But British Columbia has actually made a much more significant contribution to music and culture. Since the 80's we've had an enduring Gothic underground... an underground that spawned the missing link between Einstürzende Neubauten and Nine Inch Nails. Homegrown groups like Skinny Puppy and Front Line Assembly paved the way for the Gothic Industrial scene to break into the 90's mainstream! What started with a handful of people in leather jackets experimenting with synths, in now unimaginably affordable Gastown warehouses morphed into Fiona Sigismondi directing videos for Marilyn Manson on MTV. We started with U.K. vinyl imports by Siouxsie and the Banshees, The Cure & Bauhaus being spun at Luv A Fair Nightclub and our scene quietly absorbed the sounds and styles and created our own version for North America. The truth is Vancouver should be recognized as an influential Gothic Metropolis.

In 1998 Gothic BC entered the fray and has been documenting ever since! All the city's parties, events & shows. From the newest club opening to oldest club closing, Gothic BC has been there. Thanks to the energy and vision of it's creator, photographer, Michael Barrick. It's a thankless task, dedicating oneself to a local subculture and the countless sub-genres that spun out from the original "Bat Cave". West Coast Deathrock, Steampunk, CyberGoth, Dark Wave, Burlesque and Fetish are all represented on the site. When I interviewed Michael on my radio show, Bad Vibes CFRO 100.5, he humbly  described what he did as a "labour of love". The big picture is Gothic BC is something important and necessary! This is history in the making. History unfolding in real time. Nobody realized they'd be part of history back at the Luv A Fair in the 80's. In 2012, I was a co-creator of a monthly Goth night based out of the Waldorf called, The Shadow Line, A quick look through the galleries of those events and you can spot an alumnus that have gone on to make their mark in the arts, film and music. Those nights were amazing and I'm so thankful for Gothic BC being there to capture the moment for posterity. Gothic BC is the official scrap book for a scene! I've always felt that a Subculture is dead once they've made a coffee table book out of it. So far there isn't a Gothic BC coffee table book, but when the time comes, it's a comfort to know what an outstanding one it will be. Here's to your next 20 years!