[Gothic BC] The Cure 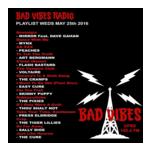 On May 25 I was on Bad Vibes on CFRO (you can listen to it here.) Marc Godfrey and I were picking from a list of music that I brought with me depending on how the conversation went. I came armed with almost three hours of music for a one hour interview, with everything picked for a reason. This is the fourth in a series of posts where I run through those choices, including the ones that we didn't get to, and talk about why I picked them.

In this post I'll cover the rest of the the Cure songs played and not played. But before I get started, I have one question. Is anyone reading these. Seriously. Comment here, like, +1 or comment on one of the automatic reposts, anything, because I really don't know what the fuck I am doing any of this (or anything at all) for.

We closed on this one, just because it was on my list and The Cure were going to be playing the following Tuesday. I did include it on my list for a reason, though. This was a favourite song of an old pen-pal (not the one I gave my Easy Cure flexi-disc to, though) and her writing about it inspired me back in my art-school days in Nanaimo to do a painting based on the song, specifically the lyric "Strange as angels / Dancing in the deepest oceans / You're just like a deam". It was the first time I had done a larger painting (five feet by four feet) and I was really amazinglly sick with a flu at the time. I remember falling asleep on the floor under the easel from exhaustion while working on it.

We didn't get to playing this one, and it is a hard one to get played anyway because it is such a misunderstood song outside of the goth community and Cure fans. It is, of course, basically a 3-minute summary of Albert Camus' The Stranger (L'?tranger). That is enough for me to make the song meaningful, since being clever and misunderstood, and being seen as scary outsiders are hallmarks of the goth subculture and this resonates both the the common reception of the song and the theme of the book itself.

Personally, it also had deeper meaning for me. Despite being familiar with the plot and theme of the book for many years, I never actually got around to reading the book until a few years ago, on my way to visit my dying mother for the last time. This was a pretty weird decision since the book actually stars out with the main character learning of his mother's death and attending the post-mortem vigil and funeral. Following that visit, from something I caught either on the way there or the way back, I became deathly ill myself?and I truly mean "deathly" in that I was sick for months and actually dying was a not insignificant posibility?both of which were major milestones in a whole series of existential crises that continue right up to the moment I'm writing this that leave the lyrics "Staring at the sea / Staring at the Sun / Whichever I chose / It amounts to the same / Absolutely nothing" echoing in my head.

On a lighter note, now. This is another one that didn't get played. The reason for picking this one is once again about the pen-pal thing that I talked about in the previous post. The pen-pal romance in this song is familiar and the whole thing conjures of a lot of pleasant memories of hours and hours spent wrting letters. Also, the title "Strange Attraction" is also a reference to fractal math (strange attractors), which is something I also devoted hours and hours to in the early-to-mid 90s when I did a whole series of artworks based around concepts in fractal math and chaos theory.

I'm reading. We have never met, but I've been familiar with your work for some time through the extended local weirdo network. Your videos have been resonating with me because of my own recent personal challenges, so thank you for them.

Thank you. That is very nice to hear. It really does help to know I'm not just shouting into the ether.