• News from the war against the Ottoman Empire
• Washington state elections (prohibition passed and other news)
• The Ukrainian Internment starting, railway sabotage and more... 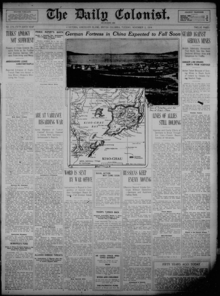 News out of Victoria, British Columbia, 100 years ago today, including a suitably macabre story of a shipwreck off the Yorkshire coast near Whitby, war news from four continents, and more.

• Troops from India featured in photographs on the front page
• British navy fully equipped, no need for additional volunteers for naval service at this point.
• Estimated three million Belgians starving [including my maternal grandparents]
• Turkey, using a ship acquired from Germany, has attacked the Crimean port of Theodosia (a former Ottoman possession, lost to the Russian Empire in 1789), effectively entering the war against Russia on the side of Germany and Austria. At this point the Ottoman Empire is not at war with Britain.
• Three men arrested as spies in Halifax
• [meanwhile on the moon] French troops are fighting Germans in French equatorial Africa [now Chad]
• The Komagata Maru has finally returned to India, arriving in Calcutta, where an "unfortunate incident" occurred. [British authorities in India tried to arrest several of the men on the boat, resulting in a gun fight and the death of 19 passengers.]
• Man who walked stark-naked into the woods near the Oregon-California border in a 30-day scientific experiment in survival will be speaking at the Pantages
• Ads that caught my eye 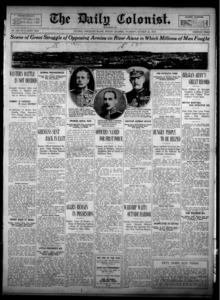 • Panoramic view of River Aisne
• Germans planning aerial raid on London. London preparing.
• Evidence that Germans had been laying foundations for gun emplacements near Dunkirk before the war started.
• Evidence that Germany established a supply and communications network in Russian Poland before war started.
• Sedro-Woolley bank robbery suspects arrested in Burnaby
• Internments of "enemy aliens" beginning in England [Canada won't be far behind]
• Quarter page ad urging merchants to push "Made in Canada" goods.
• Ad for gasoline at 18¢ per gallon [that's about 3.9¢ per litre]
• Fantastically illustrated quarter page ad for Fry's Cocoa

German attempts to advance along the coast of Belgium toward the English Channel continue to not go well. Serbians have taken forts in Sarajevo (and even though that's were the war started, it does seem like a side-show now.)

• An estimated two million Belgians are refugees outside Belgium
• Body washed ashore near Carmanah
• Bomb explodes in Montréal.
• Proposal to build "airships of all types" in Victoria.
• Miss Frankie Seigel, "first-rate blackface comedian of the Bert Williams type" to perform at Pantages Theatre.
• "More Reports of Atrocities" by Germans at length and in gruesome detail.