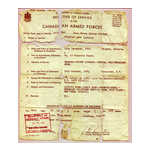 Look at the surname: WOROBEC. That's his Ukrainian surname before he anglicised it to Barrick. His grandparents came to Canada from Zakarpattia, which was part of the Austria-Hungarian Empire at the time. They left because ethnic Ukrainians were not treated well by Hungary. Land was being expropriated from ethnic Ukrainians to be given to Magyar Hungarians. When WWI happened and the British Empire went to war with the Austria-Hungarian Empire, they were "enemy aliens". Thousands of ethnic Ukrainians who came here in the hopes of being treated better got put in concentration camps and used as forced labour. Today, November 11, we celebrate the armistice that ended the fighting in WWI, but the war didn't officially end with Hungary until the Treaty of Trainon was signed on June 4, 1920. The internment of enemy aliens did not end until the war was officially over in 1920. Many ethnic Ukrainians in Canada endured six years of slavery for nothing more than being born in the wrong part of the world.

Back in Europe, between the wars Stalin did his best to starve Ukrainians out of existence. In 1932-33 Zakarpattia was part of Czechoslovakia and spared from the starvation policy of the Holodomor, but after it became independent in late 1938 it was a matter of months before Hungary invaded and summarily executed 27,000 ethnic Ukrainians. So even through the Russians had tried to starve everyone to death only six years earlier, 75,000 people decided to take their chances in the Soviet Union. This act of desperation led to 60,000 of them dying in Russian Gulag labour camps.

Despite how Canada treated Ukrainians in the First World War, in the face of the popularity of the National Unity Party (i.e. Canadian Nazis) in Alberta with "real" Canadians, it wasn't hard for my Ukrainian father to see who the bad guys were. Like their "Brown Shirt" counterparts in Germany, the Canadian "Blue Shirts" were fond of beating up immigrants, minorities, and liberals. At the time being a Ukrainian meant being an immigrant and a minority to "white" Canadians.

In Zakarpattia the invading Nazis exterminated the local Jews and Roma wholesale. But with Stalin as the Supreme Soviet of the Soviet Union, fresh memories of the Holodomor, and unaware that Hitler's "Living Space" (Lebensraum) plan for Ukraine was to kill off three quarters of the ethnic Ukrainian population and to use the remaining 25% as forced labour on farms to feed the Master Race, some Ukrainians sided with the Nazis, perceiving them as the lesser of two evils.

After he was discharged my dad moved to the deep south of the United States. In the face of rising Cold-War tensions and "Red Scare" MacCarthyism the idea of ending up on a chain-gang for nothing more than having a Ukrainian name was a very real threat, thus Worobec was swapped out for the English name Barrick.

Now, this Remembrance Day, I'm downright ecstatic about the Russian invaders being pushed out of Kherson. Enough of despotic megalomaniacs. No more genocidal invaders. No more imperial overlords. Слава Україні!