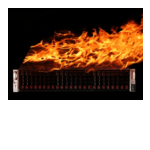 *ugh* E-mail for mbarrick.net, mbarrick.com and gothic.bc.ca (and less-importantly, araneum.ca) has been down since the wee hours of Sunday morning. I didn't even notice until Sunday night because I got off to such a slow start yesterday. And it's not just ordinary 'just restart the service' down, but 'hosting company managed to have a catastrophic RAID failure that took out a whole bank of virtual servers' down / 'full restore over a slow connection' down.

I'm not going to lose anything but time since I have two levels of redundant spooling for incoming and every scrap of data is backed up redundantly because, not only does shit happen, but sometimes shit happens and shit happens to the shit you set up in case shit happens at the same time. After all, you can't even have a RAID failure without two things screwing up since the 'R' is for 'redundant' (except for a RAID 0 striped array, which isn't, and probably should just be called AID, but whatever) and I have had the horror of being there, so fair enough, spilt milk and whatnot. Still a big, fat time-suck, though.