The Age of Digital Reproduction 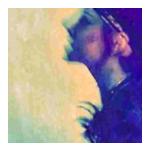 In case you don't already know, the title of this post is a reference to the 1936 article by Walter Benjamin, The Work of Art in the Age of Mechanical Reproduction. Call this an unfinished thought, a rant, a ramble, what have you. It's on my mind when I am making images and when I am intentionally not making images.

There is a lot in Benjamin's Marxist critique, but my take-away when I first read it in art school was the idea of the "aura" of an artwork. This gist of that is that which makes an original work of art special is the not just the thing itself, but its uniqueness and the sense of connection with the hand of the artist. The original is worth more than the reproduction. He goes on to talk about inherently reproducable art like literaturature that does not depend on the aura and extrapolates from there into the new(ish) medium of motion pictures and how a film, not seen as fine art because it has no aura, really is by the same virtues as literature. These are all important ideas that start Modern (big-m) art down the path to non-representational abstraction and ultimately conceptualism with the divorcing of the idea from the object. Something which generally people are still having a hell of time wrapping their heads around 60, 70, 80 years after the fact. "Where is the art?" is a pretty common refrain in the guest comments at the art gallery where I work.

And that is all great until I start thinking about the books I have in my collection, where a "Happy Birthday, June 1942" inscription in a book from a used book store written by some dead stranger to some other dead stranger makes that book far more interesting to have than another copy of the exact same literature. Or that the books that I bought while shopping with my dad in used book stores when I was a kid mean more to me than the same copy of the same literature signed by the author. The object and the aura trumps the artwork itself, and this may be the "cult value" that Benjamin talks about in section V of his essay.

And then it gets weirder still when I am making images at work. I work in an academic art gallery that has a mandate that places particular emphasis on the "avant-garde of the 1960s and 1970s" and frequently find myself photographing conceptual art, much of which is ephemeral and consciously objectless. Then my photos end up in exhibition catalogues with my name on a photo credit of something that is just the shadow of a shadow of someone else's idea. The book gets published and I take my copy home and put it proudly on a shelf because my name is in it, in an index in the back, referencing some image no one who might interested in the artist I've documented cares who took. But it is there, and it will be there in a hundred years hanging off that shadow of shadow of an idea like a bat under Teddy Roosevelt's left nostril on a postcard of Mt. Rushmore. "Oh, hey! A bat!"

Weirder still is documenting artifacts of conceptual performances. I have taken very careful photos of 40 year old rope soaked in fish blood not by some faintly practical thing like being from a famous fish boat (are there such things?) but made special by its use in a performance by an artist admired by another artist who kept the rope as a souvenir that in turn became part of an archive that has become part of the archives at the gallery. The picures, which are digital and have my name embedded in the metadata, will likely outlast the rope and some day be the only record of this archived souvenir of the performance of an idea that appeared in an exhibition about art about ideas.

That's the work I get paid for.

Then there is work I don't get paid for, the work I frequently end up paying to do, "my work."

It's graduation time at UBC right now. Tuesday, while I was walking past the back steps of the Irving K Barber Learning Centre (which once were the front steps of the old library) and there was a guy with a camera taking some graduation pictures of some privledged kids. He was using a wireless flash rig that I have looked at before. It costs more than I make in a month. And I could tell from the way it was placed that he wasn't making any kind of interesting use of it. If there was going to be anything interesting about those pictures it would be some kind of accidental punctum like a spider on the girl's graduation cap (that would most likely be photoshopped out anyway.)

So what all this rambling has been getting two are the two central—and lately, crippling—questions I've thinking about with my own photography.

First is the not so simple question of "what is it?" With digital photography there is no physical object to attach any "aura" to. There is nothing but exhibition value. And what's there to look at? I touch on this a little bit with this "photograph": 433x433.

It is a transparent PNG with the exact dimensions of 433 px × 433 px in reference to John Cage's silent musical work 4'33" (The embedded version here is a video I shot for work.) You can't see it, it doesn't exist, there is no "original", when it is transformed for display it loses its dimensions, sharing on some sites will convert it to a non-transparent file format like JPEG, printing it out is meaningless. So what is it? And how is it different from any other digital photograph?

How can you value a digital photograph? I get paid to take pictures at work and the occasional freelance job and for that I am being paid for my time and skill, but what value in the photograph itself? The digital image is infinitely reproducable with absolute fidelity. The owner of the image as prescibed by law assert copyright if the image is being used in a way they don't approve of, and that ownership is more about the idea of the image and the ideas in the image, but not the image itself. I can own a book, but not own the literature in it, that's easy to understand. But with something digital, what's there for the viewer or listener to own? I'm not going to resolve this question right now, because it is a big, thorny one obfuscated by the clutching greed of dinosaur media-distrobution middle men in the music and film industry desperately trying to impose the value of the thing on nothing and maintain models that don't make sense anymore.

There is an opinion article on Petapixel by Neal Rantoul entitled A Disturbing Trend in Photography talks about how the object of the photograph is gone, individual photographs seldom have meaning that stands alone, that tcontempoary art photography "resides perilously close to using the photographs as illustrations" due to the same dependency on external theory that conceptual art has, and goes on ultimately to lament,

As photography becomes ubiquitous, as we are all photographers and even the most simple of cameras made today provides stunning results compared to a few years ago, photography is free to explore areas never approached before. That’s all good. But please give me less words and better pictures! I find the story, the text, mostly boring and condescending, telling me how to look at the photographs rather then [sic] letting the photographs do the talking.

But I ask, what bloody good are even the "better pictures"? For most people they will just flash by on a screen, most likely a tiny little phone screen, maybe get shared some and have some brief viral life before fading into thin air.

I have a body of work, hundreds of thousands of photos, that now reside in a world where anyone can take similar pictures, and do, and share them to death on social media, so that these old photos themselves are unremarkable. But that this body of work comes from a time and place when the access to take the pictures wasn't available to just anyone and the technology was new so what I was doing was remarkable. For a moment. A moment that has passed.

Which brings up the second question: what do I do next? I cannot push the technical boundaries anymore because I cannot compete with the likes of the droll pedant on the back steps of the library with the $x,000 flash. The beautiful and/or meaningful pictures I could take will just get lost in the net like the odd dolphin in a net full of tuna. I'm disinclined to flog my 2000-2012(ish) body of work for nostalgia value or just keep adding to it for the sake of making it bigger and pretending that makes it better. Besides while "more of the same" is easy, it's also boring and trite.

Oddly enough, I have been doing more writing lately.